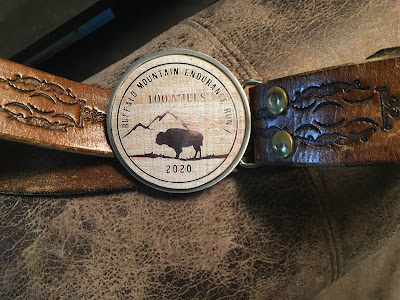 First, this might rank as my favorite race venue ever! It's little valley nestled amongst the mountains where the Methodists used to host a summer youth camp until mud slides did so much damage that they abandoned the venue, but has since been rescued and turned into a nice little retreat center that hosts weddings and other special events. Roxanne and Billy have done amazing work to clean, repair, and keep The Buffalo Camp open. 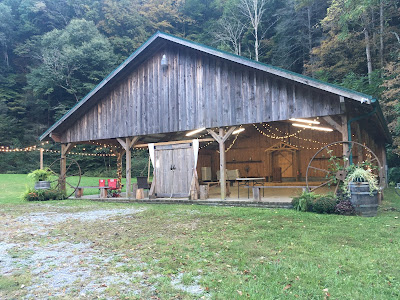 The course: Netta says it's 70-30, paved to unpaved, Tony says 60-40, but regardless, it's 95-5 in terms of elevation change,and better measuring devices than my eyes might say there's not even 5% flat surface – lol. Still, it's a fast course, as I was to learn as the race unfolded.

I arrive late afternoon, Thursday, and enjoyed having the place to myself. There had been recent rain, so Dry Creek was a bubbling brook, and there's little more soothing than the sound of water rushing through the rocks. I sleep well, despite temps dropping into the low 40's by morning. 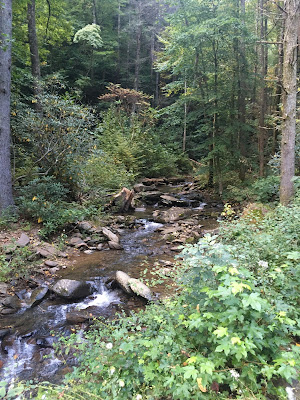 The race starts at 8pm, so around 5pm, I fix my first cup of real coffee in two weeks. I've been enduring a blend of 85% decaf and 15% regular, hoping any caffeine I consume during the race will have a better kick. I also heat up a can of Progresso chicken noodle soup and mix in a whole bag in Four Cheese instant potatoes. This isn't bad, but maybe next time I'll use just a a half-bag of potatoes! 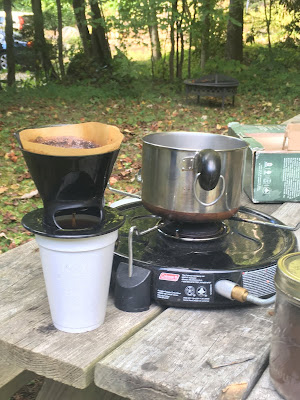 My race starts out well. The course is 1.25 miles long, and I soon realize that a 15 minute/lap pace might work for me, at least for a while. By the six-hour mark, I've reached 30 miles and know I'll be needing to slow soon. I drank a wide range of beverages: Coke, Dr Pepper, Sunkist, coffee, Sword, and even (gasp!) water – lol. I ate a little here and there and my stomach responded well. The cooler temps must suit me :)

Early on, I knew I was 5th place male, but I didn't focus on that. I only want to know two things: what lap number I've just finished and what my elapsed time was on the previous lap. I believe that if I set my goals right and hit my marks, the race will take care of itself. However, I am aware that that Tom Ecay and Shawn ??? are running up the hills, lapping me with abandon. There's no temptation to follow suit, but I'm impressed and a bit envious of their ability.

As I settle in, I decide that breaking the race up into three 12-hour segments might help with my goal and pace setting. I want 100 laps (125 miles), and a 40-40-20 strategy seems doable. Paul Heckert, an astronomy professor, points out Mars, Jupiter and Saturn in the night sky. It's a beautiful night, and if the moon isn't full, it's very close to it! The temps drop into the upper 30s, but I remember what Tony said about regulating my body temperature and modify my dress accordingly. 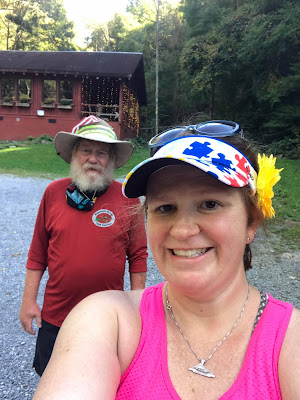 By 8am, I've reached 45 laps (56.25 miles), and the daylight hours, which should be good ones, aren't going as well as I've hoped. I've slowed to 17 minutes per lap, and even that pace is erratic. I'm glad I built up that five-lap buffer, but I don't like it that I'm struggling. Lianne Jennings did ask for my thoughts on when to take a break, and I had been thinking about right around sundown, as it would still be warm enough to not feel chilled to the bones when I get up to head back out on the course. My answer is holding me accountable, but these laps are not going well. I even take a five-minute lay-down on the concrete at the aid station! 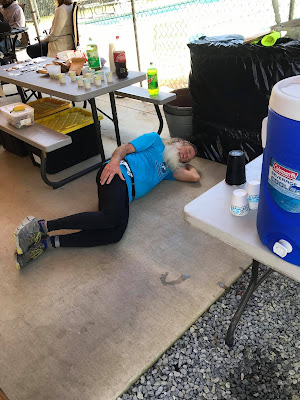 I share my frustration with Tony, and he asks me about my salt intake. He tells me that I am one of the few people sweating, and that even in the cooler temps I am losing electrolytes. I confess that I haven't been, so I immediately down two Salt Stick caps, a caffeine pill, and a vitamin B-12, hoping that the whole mess doesn't come right back up on me. My pace does not improve, but it does not appear to getting worse, and I keep counting down the laps. I really appreciate Tony converting my lap numbers into miles, as it gives me more reference points to celebrate. I need eighty laps to reach the 100 mile mark, and having goals within the goal helps keep my mind in a slightly more positive space.

I reach the 100-mile mark before dark (around 22.5 hours), the first time I've done a sub-24 hundred in a long time, and this while walking all the uphill sections! I reward myself with a break in my zero-gravity chair, and a change of batteries in my handheld for the night ahead. It wasn't to be. The flashlight doesn't turn on, and the new batteries, really are new, and putting the old batteries back in doesn't solve the problem either! I have a headlamp, so it will have to do. As for a nice comfy nap? Nope! The legs are twitching and kicking and I can't get comfortable. Nothing to do but get back at it. 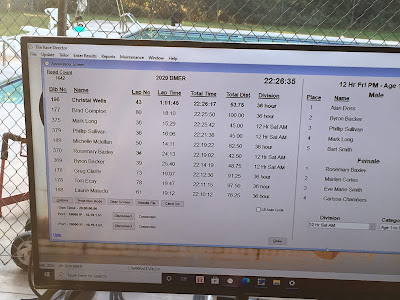 I only need twenty laps to reach my goal, so I walk a lot more, still hoping to keep my pace under 20 minutes per lap. I'm in a close race with Tom for the lead, as Shawn, who finished his 100 miles at least 90 minutes before, is no longer on the courser. (Shawn had dropped from the 36-hour to the 24 before the race, though I didn't learn that until later, so kept wondering if he would be back after a few hours of sleep.) Tom rests a little too, but comes back out to help Greg reach his first-ever 100-mile finish. Liann is still moving well, and has her sights on a new distance PR. Later, Tom would help her reach that mark also.

I take a two-hour nap when I reach the 90th lap, and dread getting back out in the cold night air. I bundle up, but after the first lap, I'm shedding layers. I take another, even longer nap at the 95-lap mark, but after that (3:30am?), I'm out there, mostly walking, for the rest of the night. At one point I counted six headlamp on the course: Tom and Liane; Paul, who wants to get to his age in miles (67), Don; hoping for 50 miles; Mateo, working hard for his first 100-mile finish; an me. Towards dawn, Laurie Mateki will be back out on the course also. There are many fewer cars in the parking lot.

As the sky lightens, I come across the start-finish line with enough time for one more lap. Tom and Liane are sitting by the fire, but there are others standing around. I ask if anyone wants to do my last lap with me, and Lisa agrees. She's been volunteering and pacing through the night, but is a bundle of energy and positivity. It is a great way to end what has been a great event!! 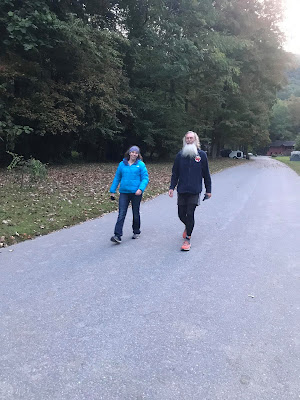 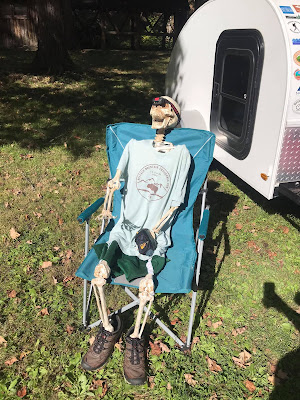 A few odds and ends.

-During one of the two nights, someone (Landy?) mentioned “to him who endureth to the end” and I ask for the chapter and verse. I spent a lot of time thinking about that, coming up with several possibilities. (I've since looked it up, and one of my guesses was right.)

-I wish I had remembered earlier in the race an idea I had gotten from Kevin Randolph on emptying salt caps into my drink. That might have made a huge difference to my daylight hours and overall performance.

-I saw a house get loaded onto a trailer and hauled away. I learned later that Billy and Roxanne had sold it, and it was getting moved to North Carolina where it will sit overlooking the Appalachian Trail. How cool!!

-Amazing how one event can have so many outcomes down the road. I met Tony, Netta and Carl at a one-off Laz race, the name of which escaped me for many hours during the race. I also met Rick Gray at that event. The race was The Bitter End, a 100-mile journey run that started in Bristol and ended in Jonesborogh, Tennessee's first state capital, back before it was called Tennessee. Later, I would meet Michelle, Liane and a host of others from the Johnson City area, and run several events with the group. I've asked Netta if she's up to another Bloody-Bitter this coming Memorial Day; I didn't finish the first one and I want to make amends. We'll see.

-My sleeping bag stunk SO bad!!! Apparently, airing it out on the clothes line between races isn't sufficient. It's already washed and hanging out to dry, even though it's only 45° outside.

-I spent a lot of time trying to figure out how I could settle in for an extended stay at The Buffalo Camp. There were a lot of small cabin-like buildings that were being used for storage, and one in particular has my name on it - rhetorically speakin – right by the creek, a big roofed-over space that would make a great three-season room, all those trails in the mountains... I finally had to drop the topic as it was messing with my focus on the race. 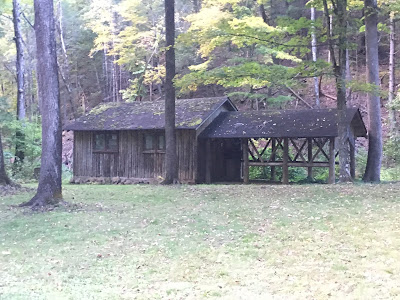 -I think I'll spare you the story about the “moonshine” motivator that wasn't. Too many updates on too many races will do that to one no longer of sound mind or body.